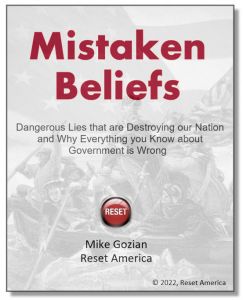 Dangerous Lies that are Destroying our Nation and

why Everything you know about Government is Wrong.

We’ve had Enough. It is time we Act.

People are furious. We desperately want change and, as it turns out, we know the problems, and we even know how to fix them.

The biggest problem in our government are career politicians and our failed 2-party system… so it’s not surprising that every study shows that people from ‘both sides’ overwhelmingly want to add competition to the Democrat and Republican Parties.

80% of voters want term limits for Congress, however, we re-elect the same politicians over 90% of the time.

In the 2016 election, the two major candidates had the lowest approval ratings in history (Clinton with 41% and Trump with 33%), but less than 5% of people voted for a different candidate.

68% of people want active 3rd parties, yet we cling to the mistaken belief that says, “voting for a 3rd party is a wasted vote” – as if voting for a non-Democrat or Republican will cause parts of your body to start falling off!

Our Voting Decisions are Illogical.

How is this any different from saying, “We can't have dinner tonight because Congress hasn't passed a law saying that we can eat.” We can have dinner without a law that allows us to eat, just like we can vote out career politicians simply by not re-electing them.

We can replace them with people who are willing to address our most pressing issues in an honest and intelligent way… people who are not beholding to their party or paid for by special interests.

Change only comes from Outside.

All revolutionary change comes from outside the system. There is no other way. This is especially relevant in politics because the people in power can make their own laws to prevent competition. How else can you have a 95% re-election rate with a 7% approval rating?

Politicians and the rich are always saying how competition benefits everyone. So, wouldn’t it be good for our 2 parties as well? The changes that we need to make won't happen by re-electing the same people and supporting the same parties that created the disasters that we face today - and who are profiting by the system they created more and more.

The iPhone didn't come from AT&T.

Netflix didn’t come from a broadcaster.

We can no longer rely on our ‘leaders’ to put our interests before their own. It’s time we elected people who are willing to do what’s right… and to do this requires us to make 3 changes our election laws.

But before any change can happen, we must understand the real reasons that prevent it… and these reasons are not what we think they are. These misunderstandings stem from mistaken beliefs. These are beliefs that were once true - but now the complete opposite of these beliefs are true. The Top 10 Mistaken Beliefs are:

The American People are Polarized

The Problems in Washington are caused by Politicians

We have Democratic Elections

There’s a Difference between the 2 Parties

With Enough Money, we can Solve any Problem

Economic Data is Clear and Constant

America is a Rich Country

We make Logical Voting Decisions based on the Facts

Voting for a 3rd Party is a Wasted Vote

Topics covered in the Book

How can congress have such a high re-election rate with such a miserable approval rating? In the book, we expose the tricks that the Democratic and Republican parties use to stay in power and how the rules for 3rd parties are vastly different from the rules that the 2 parties require for themselves.

The book proves that the changes that we must make won't happen by re-electing the same people and parties that got us to where we are today… and who profit by the system that they themselves created.

It will convince you to stop blaming Washington for our problems. Politicians are people – and people will always look out for themselves. So, who’s really at fault... politicians who are merely being human and looking out for themselves or the people for giving limitless money and power to a small group and hoping that they don’t manipulate the system over time to protect their way of life?

It shows why our voting decisions make no sense. It uncovers the unconscious psychological influences that determine how we think and why we vote opposite to what we say that we want. This includes herd behavior, brainwashing and cults, human behaviors and unconscious biases.

It explains why social media and disinformation campaigns are so successful in manipulating the opinions of people and why this is the cause of the extremism that we have today. It also defines terms that have been in the news recently, like gaslighting, cancel culture, tribalism, click-bait and how companies, the parties and the media play tricks to control what we think.

It exposes the criminal and unethical practices that the Democrat and Republican parties use to force out competition to maintain power and live in a different class.

It proves that the behaviors, actions, and most of the issues of the parties are exactly the 2 parties are same, and it explains why our election process is ranked the least democratic in the world. (Actually, we’re tied for last… I was exaggerating for effect.)

It reveals many of the no-cost solutions to our worst problems that insiders don't want you to know about and why these solutions have no chance happening when getting re-elected is the only factor that drives every decision Washington.

The book explains which vote is truly the “wasted vote”… voting for the lessor of two evils or voting for the candidate who you would prefer to win the election. The truth is that a vote for a democrat or republican is the “wasted vote”. In fact, it’s worse than wasted because it supports a corrupt system that prevents the changes we need. If you plan to vote for a democrat or republican, then we are all better off if you don’t vote at all!

It proves that opinions of voters from ‘both sides’ are not as ‘polarized’ as we are led to believe – especially when we look at our current situation from a 10,000 foot view.

It serves as a resource for 3rd parties and independent candidates. It provides useful data, talking points, and a standard definition of terms and slogans for the 3rd party movement. Anyone is welcome to use this information (so long as you obtain permission and if the material is properly sourced.

Finally, it presents a simple and realistic plan to make all this happen in the next few elections. Our first, and immediate, goal is to convince all Americans to only vote for candidates who support these 3 policies… Term Limits, Rank Voting and Equal Rules for 3rd parties so that independent candidates can have an equal chance of be. It can’t be any easier.

We reached a Tipping Point

We've been living with these mistaken beliefs for too long. People are ready for change. Exposing the truth behind our corrupt election process and illogical voting decisions are the first steps in changing the dangerous trajectory that our nation is on.

There are simple, no cost solutions to some of the worst problems, but time is running out. We must replace our current crop of politicians with fellow citizens who will pursue these opportunities before it’s too late.

The book is written by me, Mike Gozian. (My legal name is Jingozian. I use a shorter name for the public to counter the effect of name bias. This is one of the many unconscious psychological influences which are covered in the book.)

In 2008, I ran for president as a 3rd party candidate. The purpose of my campaign was to spread this message to the public. We achieved some major wins, like killing the national ID card program and exposing insider trading. Sadly, the real ID card was later re-introduced in secret and passed… and the laws preventing insider training were reversed one week later by Pres. Obama. (Did you expect anything different?)

During the early stages of my campaign, I was the leading independent candidate even beating Hillary Clinton in some online polls. In the book, I reveal some of the dirty tricks that the parties used to disrupt my campaign… some of which still go on today.

In 2007, Mike produced a short video that exposed some of the ways that the 2 parties use to rig the system to maintain their grip on power. The video received the Telly, W3, Marcom and AVA Awards for best short political video.

You can read more about Mike here:

Those who don’t attract a peaceful revolution today will be responsible for a violent one tomorrow.